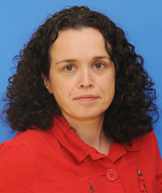 Ms. Ni Sheaghdha qualified as a General Nurse in 1988 from Jervis Street Hospital. She then moved to the UK where she specialised as an Intensive Care Nurse.  She has worked in Ireland, the UK, Australia and the USA as an ICU nurse.  On her return to Ireland, in 1993, she joined the staff of St. Vincent’s University Hospital, Dublin.

Phil joined the INMO as a full-time Industrial Relations Officer in 1998.  She subsequently completed an MA in Industrial Relations and Trade Union Studies, in 2007, and was appointed Director of Industrial Relations in 2008.  In addition, she obtained a Higher Diploma in Employment Law in 2015.  Phil has been a member of the Executive Council of the ICTU for many years and currently sits on the ICTU General Purposes Committee.

Phil is currently chair of the Health Service Staff Panel, the collective body for all unions representing staff in the health service, and, in this capacity, has led the union side in many different sets of negotiations.  Phil was previously a member of the Employment Appeals Tribunal.

Phil is a native of the West Kerry Gaeltacht, is bilingual and her first language is Irish.

Speaking after today’s announcement she confirmed her vision for the INMO is to continue and develop the good work of Liam Doran.

“I would like to thank Liam, and all the INMO colleagues I have worked with over the past 19 years. I have been very fortunate to have had such a great mentor, as Liam, and such committed colleagues within the Organisation.

I am delighted the Executive Council have approved my appointment.  While I do not underestimate the challenges involved, I would like to assure INMO members that, as General Secretary, my agenda will be very forthright in progressing and improving the conditions of employment, for nursing and midwifery, and developing the role that they play in healthcare management and delivery.

I am confident that, surrounded by the excellent team of staff, and pro-active Executive Council, this can be achieved.”

INMO President, Martina Harkin-Kelly, on behalf of the Executive Council and all INMO members, welcomed the appointment saying:

“The INMO is very fortunate to be in a position to appoint such a formidable and committed person as Ms Phil Ni Sheaghdha as our General Secretary Designate.

I know that Phil, working with the entire team in the INMO, will continue to build, and further strengthen, this Organisation as we strive, on each and every front, to improve the professional and working environment for every nurse and midwife in this country.  Phil has a track record of achievement, second to none, and I look forward to working with her, during my tenure as President, to address all of the issues that are so challenging at this time”.

“Phil’s appointment is another milestone in the development of this great Organisation.  Phil has a commitment to the INMO, and each and every member, which is exemplary and this, combined with her expertise and knowledge, will ensure that the INMO goes from strength to strength in the years ahead.

The INMO in the expert, competent and assured hands of Phil Ni Sheaghdha will face, and overcome, all of the challenges ahead”.

Thank you Letter to the INMO from Pieta House
Letter 19.07.17

Presentation of Money Raised by the Health Voices Choir for Pieta House
Notice 23.06.17