Media  Press Release
Winners of the Nurse and Midwife of the Year Award 2019
print
Press Release 29.11.19

A Dublin nurse specialising in child limb reconstruction has won the INMO Nurse of the Year Award for 2019.

Anna Wade, who lives in Dunboyne, works in Cappagh National Orthopaedic Hospital in Finglas, as part of a specialised team. Nominated by her colleagues, she is developing an electronic care plan for patients and worked to establish a child-friendly environment in the hospital.

A Laois midwife, Clare Kennedy, who works in St. Luke’s General Hospital, Kilkenny, won the Midwife of the Year Award.

She provides holistic care to women, their families and babies. She was nominated by her team for “going above and beyond” in her patient care, while also being a supportive voice to colleagues.

The Nurse and Midwife of the Year Awards were relaunched this year by the INMO to celebrate the incredible works by its members across Ireland. They were presented in the Richmond Event Centre (formerly a hospital) on Thursday night.

“I’m still in shock to be honest! I got a call from the INMO to tell me I had won the award while I was at work and I was just so humbled and surprised; I just couldn’t believe it.

“There is a whole team here who work really diligently to make the service run so well. It’s a really innovative and evidence-based service.

“I also want to thank the management team here for their ongoing support. I was nominated by my colleagues so I am taking them for afternoon tea in Kilkee Castle so we can all celebrate together.”

“I was so surprised when I heard that I had won the award. To think that my colleagues would take the time to nominate me, that was amazing.

“I work with children and their parents before and after surgeries and I see them sometimes several times a week so we build up a great relationship with them. Parents love it here as it is out of the city and there is space to work, without as much stress. There is a super team here and we try to foster a community atmosphere between the patients, their families and the staff, so it all makes for a great service for our clients.

“I am so passionate about my role and I always want to learn more to benefit the children of Ireland. It’s a challenging but very rewarding role."

“There is no shortage of talent, skill and dedication amongst Ireland’s nurses and midwives. Our panel had an incredibly difficult choice, but it is an honour to consider Anna and Clare as colleagues and fellow INMO members.

“Throughout the nomination process, one thing we heard over and over from patients was that all nurses and midwives deserve awards for the work they do. Our professions are often undervalued by the government and employers, but it’s heartening to know that the public hold us in high esteem.”

The awards are a part of the INMO’s commitment to Nursing Now, a global campaign, run in collaboration with ICN (International Council of Nurses) and WHO, which aims to raise the profile of nursing and midwifery and to highlight the essential contributions nurses and midwives make to healthcare.

- Further biographical information on both winners below: 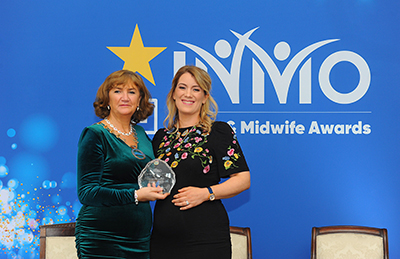 Clare Kennedy is a midwife from Co Laois, who currently resides on the Carlow/Laois border and works in St Luke’s General Hospital Maternity Services Kilkenny.

After completing her nursing BSc Nursing Degree and HDip in Midwifery in UCD, Clare went on to train both clinically and academically in Health Assessment, Midwife Prescribing, Obstetric Ultrasound and Examination of the Newborn. TCD (2013-2015 MSc Midwifery)

Clare was registered as an Advanced Midwife Practitioner in 2018. Her role now involves providing women centred holistic care to women, their families and their babies. Clare is the clinical lead for all aspects of physiological childbirth in SLGH which advocates and empowers women and midwives in their decision-making process and which offers alternative choices in the type of care and birthing options that are available.

Clare has been nominated for the award of ‘Midwife of the Year by her team, The Integrated Community Midwifery Service at SLGH. They tell us that Clare goes above and beyond in her role on a daily basis working not only as a caring reassurance to the women using the SLGH maternity services but also as a support to the team around her and an advocate for the future of research-based clinical practice in the Maternity sector Nationally. For Clare, being a midwife is not just a job, but a passion and this holds true in her character as well as her professional contributions. 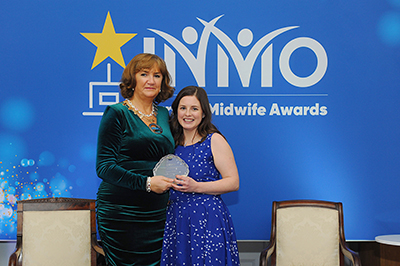 A Dublin native, Anna Wade now lives in Dunboyne with her two young boys; James who is 8 and Conor 7. Supported by her husband Stephen, Anna has had an incredible journey in her career to get her to where she is now.

At the age of 16 while still in school, Anna decided on nursing as a career for herself. Starting in 2001 with a Diploma in Psychiatric Nursing, Anna continued studying to achieve a Higher Diploma in UCD followed by a BSc in Nursing at the Royal College of Surgeons Ireland, graduating in 2006. After becoming a member of the British Orthopaedic Practitioner Association, Anna continued to complete several orthopaedic courses to keep her skills and knowledge current while gaining experience.

Having been inspired by her Mum who is due to retire as a Diabetic Nurse Specialist in December and the personal connection she had with her own children, Anna directed her goal towards becoming a Paediatric Orthopaedic Nurse Specialist which she achieved in Temple Street in 2017.

From experience with trauma frames in conjunction with a Diploma course in Queens University Belfast, her interests changed to Paediatric Limb Reconstruction.

Encouraged by her Mum, Anna joined the team at Cappagh National Orthopaedic Hospital in 2018 as their Paediatric Orthopaedic Nurse Specialist. With a huge interested in Limb Reconstruction surgery coupled with a thirst for knowledge, her role at Cappagh developed. From her experience in Temple Street Hospital, Anna learned that the education of parents and guardians in relation to the treatments, constantly tracking the progress of the patient and being contactable, are crucial aspects for the service.

Along with Liz Meleady (Specialist Limb Reconstruction Physiotherapist) and Consultant Mr Connor Green, Anna began working to build these services at Cappagh, working as a team to providing pre and post op education, treatment and continuing to care for patients. This has led to a very streamlined process whereby a community of patients get to link in and get full expert knowledge directly from one team all in Cappagh Kids, the new home for Paediatric care at Cappagh National Orthopaedic Hospital.

Anna Wade’s career has been driven by self-development, learning and a passion for caring for others. This continues today with the various projects she takes on in addition to the extraordinary care she provides for her patients including the development of an award nominated electronic care plan for the journey of a Limb Reconstruction patient and establishing a child and family friendly environment within Cappagh National Orthopaedic Hospital.

Condolences on the death of nurse Solson Saviour
18.01.21

Urgent care for children of health workers must be provided - INMO
Press release 6.1.21

All Ireland midwifery conference brings together midwives from north and south of the Irish border
Press Release - 5.11.20

Give us the staff we need to beat COVID, says INMO conference
Press Release - 9.10.20

Midwife-led unit at Cavan General Hospital must not be threatened - INMO
Press Release - 6.6.20

Government must go back to drawing board on childcare
Press release: 13.5.20

Tens of thousands of nurses and midwives are being short-changed -INMO
Press Release - 30.04.20

Government childcare offer “does nothing” for vast majority of nurses and midwives – INMO
Press Release - 22.04.20

Trolley overcrowding 9% worse than any other year
Press release 2.1.20

Health crisis out of control in Cork
Press release: 02.08.19

81 on trolleys in Limerick - highest ever recorded in an Irish hospital
Press Release - 3.4.19

INMO and employers to go to Labour Court over contract
Press release: 11.03.19

No proposal, no invitation: nurses’ strike to go ahead
Press Release 04.02.18

“Inspiring”: public thanked by nurses and midwives for support on pickets
Press Release: 1.02.19

Labour Court will not intervene in nurses’ dispute - strike to proceed
Press Release - 29.1.19

2018 is worst year on record for hospital overcrowding
Press release 2.1.19

ICTU Executive warns “no deal” Brexit would be a catastrophe for workers North and South
Press Release 21.11.18 ICTU

Nurses and midwives to vote on strike action
Press Release 06.11.18

Cashel nurses to step up industrial action due to understaffing
Press Release 03.10.18

Nearly 8,000 patients forced to wait on trolleys and chairs in September
Press Release 1/10/18

Kilkenny and Cavan nurses and midwives to continue protests against understaffing
Press Release 17.9.18

Nurses and midwives to protest at hospitals across country
Press Release 10.9.18

HSE admits they have no emergency department plan for winter
Press Release 7.9.18

INMO calls on government to meet on pay
Press Release 04.9.18

611 Patients on Trolleys in Cork University Hospital so far this Month
Press Release 24.05.18

INMO Calls For First Two Weeks Of March To Be Declared And Treated As Emergency Period
Press Release 04.03.18

First Week of 2018 Highest Number of Patients on Trolleys Ever Recorded
Press Release 05.01.18