With approximately 160 different nationalities now living in Ireland, cultural diversity and its implications play a key part in the day to day life of Irish nurses 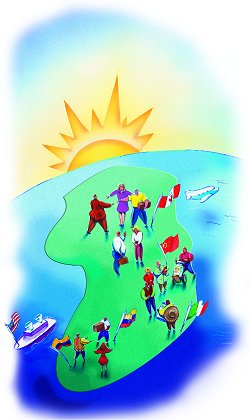 Cultural diversity is not new in Ireland. The Traveller community is estimated at 22,000, and there are long established Jewish, Islamic, Asian and Chinese communities here. However, there has been a dramatic rise in inward migration in recent years. There are now approximately 160 different nationalities living in Ireland.

According to figures from Know Racism (the National Anti-Racism Awareness Programme), inward migration to Ireland in 2001 was 40,189. So what are the implications for nursing in a climate of great cultural diversity?

Primarily the aim is to strive towards cultural competence a set of behaviours, attitudes and policies, that will enable nurses to work effectively in cross-cultural situations. The goal of caring for culturally diverse clients is to discover and use culturally relevant information.

Davidhizar and Giger,1 in their Transcultural Assessment Model, suggest that culturally diverse nursing accounts for six varying phenomena communication, space, social organisation, time, environmental control and biologic variations. In this article we address some of these phenomena in relation to the Traveller Community, patients from China, and Romani Gypsies.

The Travellers are a minority community indigenous to Ireland. Despite a common belief that Travellers are descendants of peasants uprooted by Cromwell, experts believe that they have been a unique group among the Irish for over 800 years.

Travellers share distinct cultural practices, distinct rituals, and a language they only speak among themselves. Travellers are widely acknowledged as a disadvantaged group in Irish society with many problems and concerns relating to racism, poverty, gender inequality, employment, education, literacy, life expectancy, political representation, and living conditions.

As a group Travellers have different perceptions of healthcare needs, and disease. The Report of the Task Force on the Travelling Community, published in 1995 identified many concerns relating to the provision of health services. Many suggestions related to the need to tackle discrimination among nurses and doctors, the need for easier to understand language and time for explanations, and the need for greater respect for the Traveller community.

At the same time health boards have reported difficulties dealing with the Traveller community. Examples include difficulties with records due to confusion with people of the same name, difficulty tracing patient in the event of abnormal results, inappropriate use of A&E services, large numbers of family members accompanying a patient, and failure to keep appointments.

However, the health boards do acknowledge that many of these issues are not wholly related to the Traveller community. So how can we, as health professionals, help address these issues?

Some of the answers can be found in Traveller Health A National Strategy 2002-2005. Many of the action plans outlined relate to structural changes, for example health promotion programmes, improved GP services, and the recruitment of public health nurses to work with Travellers.

At local level education and awareness is always a good starting point, and the report identifies the need for appropriate in-service training on matters concerning Traveller culture for all staff, especially those who come into periodic or regular contact with Travellers.

In the meantime there are varying resources to guide and inform our care reading the strategy, attending study days on cultural awareness, and websites such as www.paveepoint.ie (homepage of Pavee Point, a voluntary organisation working for Irish Travellers).

The term Chinese covers a diversity of individuals and communities. Indeed there are an estimated 56 ethnic groups in China. Diversity in China is also evident by varying religious beliefs. Statistically there are over 3,000 religious organisations. The main religions are Buddhism, Islam, Catholicism and Protestantism. Individual values can be greatly influenced by cultural norms.

Communication: While Mandarin is the official language, Cantonese, Hokkien, Hakka and Teo-chieu are also spoken. It is therefore necessary that assessment of the patient includes identification of language and dialect. As well as helping to make the patient feel at ease, it is of vital importance in helping to find an appropriate interpreter.

Awareness and understanding of non-verbal communication is equally important. For many Chinese people avoiding eye contact, shyness and passivity are cultural norms. Many will avoid saying no because they consider it impolite or offensive. Therefore the nurse may have to emphasise the importance of acquiring specific information to aid in nursing care and diagnosis.

Diet/feeding: Many nurses would acknowledge that popular Chinese foods include rice, fish, meat, noodles, soya beans and tofu. However, it is also necessary to be aware that some Chinese may attribute illness to an excess of hot or cold foods which causes disharmony of body elements. Therefore to properly address nutritional needs it is necessary to identify attitudes to food and food preferences.

Breastfeeding is common practice though lack of support and language difficulties may result in mothers giving up sooner than they would otherwise.

Chinese medicine: Widely divergent from Western medicine, health is believed to be a balance of positive (yang) and negative (yin) energy. Passages of seasons and changes in weather also have an influence on the body. Many people will use traditional Chinese medical treatments including acupuncture, acupressure and Chinese herbs. Dietary therapy and supernatural healing may also be used.

To elicit an understanding of their illness it is necessary to listen to their explanation of their illness even if it seems unusual to you. It is also important to ascertain if they are using any alternative medicines at present or are having other treatments such as acupuncture for their condition.

There are approximately 120,000 Romani Gypsies located in many countries around the world, though this is difficult to estimate as they are not recorded on most census. Romani Gypsies have a turbulent history. Originating in India they were beset by persecution and they found their way to Europe around the 15th Century. Over 600,000 were persecuted during World War II.

Communication: Romani language is of Inde-Aryan origin, with many spoken dialects. As they branched out and travelled, different populations of Romani Gypsies became based on language. For example the Domari population (the Dom) are mainly based in the Middle East and Eastern Europe, the Lomarren population (the Lom) in central Europe, and the Romani (the Rom) are mainly based in western Europe. It is therefore essential that initial assessment includes identification of the patients primary and secondary language.

Dress: Dress is of enormous significance for Romani Gypsies. Dress codes identify values and signify social occasions. As nurses it is important to be aware of this in order to avoid making rash or irrational judgements about the individual.

For women usual attire consists of long colourful skirts. Heavy earrings and often flowers in their hair. It is a grave offence for Romani women tot show their legs, it may be seen as ‘impure’.  Married women usually have long hair and cover their head with a ‘dilko’.  Jewellery is worn more for its intrinsic worth than aesthetic value.

Romani men have no specific characteristic clothing; instead their head is seen as the focal point.  Many draw attention to their with wide moustaches, or by wearing bright neck scarves for festive occasions.  From a nursing perspective it is imperative that privacy and dignity are a priority.  As jewellery is worn for its intrinsic value, nurses should be vigilant to reassure that patient and family if jewellery is removed for any procedure or investigation.

Food and during:  many Romani Gypsies are conditioned by a nomadic way of life.  Breakfast may only consist of strong sweetened coffee.  Lunch is often skipped and dinner is traditionally served at sunset though this may vary.  Diet consists of pasta/rice/potatoes, and game or fowl when available. Coffee is a popular beverage, followed by water.

Weddings and christenings involve elaborate feasts, with roast hedgehog a traditional favourite.  The consumption of horse flesh is considered a serious offence.  This relates to their historic nomadic existence and reliance on horses for transport.
The implications for nursing relate to identifying normal diet and nutrition, and incorporating dietary time preferences into care where possible.  Finally it is hoped that this article will help increase awareness of the needs of the communities mentioned as we strive towards cultural competence.

This article is based on a class project by October 2001 Higher Diploma in Nursing Studies, Our Lady’s Hospital for Sick Children, Crumlin.  Coordinated by Maria Brenner, Nurse Tutor.

References can be requested from nursing at medmedia.ie