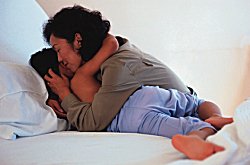 The aim of treatment for eczema is to control the condition in order to improve quality of life, write Christine Heath and Carmel Blake

Atopic eczema, also known as atopic dermatitis, is a common skin condition affecting 10%-15% of children. It is characterised by inflammation of the skin accompanied by intense itch.

The condition usually appears in the first year of life and approximately 80% of sufferers will grow out of it by their mid-teens. Unfortunately, we cannot predict who will grow out of it and who will carry it into adult life. It is important to understand that treatment will not cure eczema but will control it.

Atopy means without place. Atopic eczema is an unusual response to substances encountered in everyday life that would normally be regarded as harmless, such as house dust mite, pollen moulds and pets.

Eczema treatment regimen would include:

Emollients are agents that soften and soothe the skin, making it more pliant. They are safe and effective in the treatment of the dry skin found in eczema; often no other treatments are necessary. Emollients contain water and lipids (naturally occurring fatty substances).These lipids form a film over the skin which reduces water loss and increases the moisture level in the skin. They restore the skins elasticity and suppleness, which decreases the desire to scratch.

Emollient therapy helps to restore one of the skins most important jobs, which is to form a barrier to prevent bacteria and viruses getting into the body and therefore help to prevent the rash becoming infected. With regular and correct use of emollients, it may be possible to minimise the use of steroid creams and maintain the skin with emollients alone.

A daily emollient bath should be part of the daily routine. This moisturises the skin, relieves itch and removes dead skin cells. It also prepares the skin for further moisturising and other treatments which may be prescribed, such as steroid creams. Bathing reduces surface bacteria and therefore reduces the risk of infection.

Soap and ordinary shower/bath products should be avoided as they strip the skin of its natural oils leaving it dry. Ideal soap alternatives are aqueous cream, Silcocks base and emulsifying ointment. These products do not lather but form a smooth cream.

If steroids are prescribed, apply immediately after bathing or at least half an hour after applying an emollient.

Parents may avoid bathing their child because the water causes stinging. If this occurs a useful tip is to coat the childs skin in emulsifying ointment before immersion into the water. The old belief was to avoid bathing, however bathing can be used to re-hydrate the skin and to seal the water in with lipid from the emollient.

Some people find emollients such as emulsifying ointment too greasy and less acceptable, however, the greasier preparations are more effective and need to be applied less often. Using an ointment at night and a cream during the day may be tried. Creams and lotions are quick and easy to apply but will need to be applied more often in order to be effective.

It is advisable to carry a small tub of emollient in a schoolbag for frequent application to exposed areas such as face and hands. The emollient can also be used during the day instead of soap for hand washing.

Apply moisturising agents in a gentle downward motion in the direction of hair growth to prevent accumulation of cream around the follicle, which can cause irritation, and perhaps infection of the follicle.

People are often reluctant to use steroids because of bad publicity, but they can be used safely if certain precautions are followed. There are four classes of topical steroids: mild, moderate, potent and very potent. The potency used will depend on the age of the patient and the site to be treated.

Mild steroids are used for babies and for the face in older children and adults. The treatment of choice should be the weakest steroid to control the skin condition. If a potent steroid is used, the patient should be weaned onto a weaker one as soon as the condition is under control.

While steroid creams/ointments are very effective in relieving the symptoms of eczema, they have disadvantages. They can mask bacterial or fungal infection by reducing the inflammatory response; and may, if used for long periods, be absorbed into the body in sufficient amounts to cause the general effects of steroid usage.

Topical steroids can cause skin thinning, loss of local skin pigment and worsening of the eczema. Experienced dermatologists use them in careful moderation.

Secondary bacterial infection of eczema is common. Signs of infection include weeping, crusting, and sudden worsening of the condition. A combined emollient-antiseptic may be used to reduce bacteria load on the skin.

A dermatologist may prescribe an oral antibiotic or a combined steroid/antibiotic cream. These should not be used for prolonged periods as resistance may develop over time.

Patients and their families should be educated to reduce contamination of their creams and reduce the risk of cross infection:

Children experience the discomfort of itching, especially at night and often want to sleep with their parents. This causes overheating leading to further scratching. It is therefore advisable to discourage children from sleeping in the parents bed.

Antihistamines at night help to break the itch cycle thus promoting sleep. Reassure the parent that antihistamines are not addictive.

Itching in relation to eczema is primarily as a result of dry skin. The response to itching is of course, scratching; this further irritates the skin causing more dryness.

In children it may help to:

Wet wrapping is a technique which has been developed to treat children with extensive eczema. It involves wrapping  patients in two layers of body suiting: a wet layer and a dry layer. Parents would need to be educated by their dermatologist/specialist nurse in order to perform this procedure.

If all regular treatment and avoidance of trigger factors fail, diet may be looked at. This is more successful in children under five years of age and should only be done in consultation with a doctor and dietitian.  Common foods that provoke allergies are cow’s milk, eggs, chicken, tartrazine and similar colourings.

It has been suggested that people with eczema may be more prone to peanut allergy; therefore it is important to be aware that some over the counter emollients contain groundnut oil (refined peanut oil). It is rarely used in emollients available on prescription.

Treatments of eczema often ignore the social and emotional aspects of the condition and concentrate of physical symptoms. Psychological stress cannot cause eczema, but can make the symptoms worse. In school, children with eczema are often ridiculed by their classmates. Embarrassment and isolation may lead to lowered self-esteem and underperformance at school.

The most useful allergy ‘test’ is detailed history taking. This should give a good indication of whether a specific allergen can be identified. IgE can be measured using the RAST test but is expensive. The skin prick test may also be used, but can be difficult to interpret.

A skin patch test can be very useful when investigating eczema when it is suspected that the allergy is caused by contact with various products, eg. cosmetics, toiletries, clothing, jewellery, medicated creams and ointments.

Eczema can affect not only the sufferer, but also the whole family, as a result of constant scratching, irritability and sleeplessness. The aim is to control the condition so that the patient’s and the family’s quality of life improves.

Christine Heath is a nurse writer with WIN and Carmel Blake is a clinical nurse manager at City of Dublin Skin and Cancer Hospital, Hume Street