As you know the INMO, together with other unions representing nurses, has, in recent weeks, stepped up the campaign seeking restoration of incremental credit for those who graduated between 2011 and 2015.

In that regard, as I hope you will have seen, we held a public protest, outside Dail Eireann, earlier today.  This protest was attended by over 400 graduates.  It was a very public demonstration of the anger, frustration and disenchantment, felt by these young professionals, as a result of the grossly inequitable way in which they have been treated. 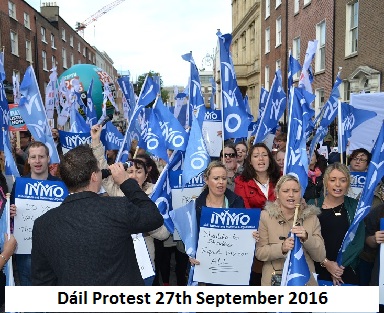 After the protest a delegation, including a number of graduates affected by this incremental credit issue, met with the Minister for Health, Mr Simon Harris TD, to tell him, first hand, of their views and their demand to have this matter addressed immediately.  Earlier the delegation also met with Senators and TD’s from all political parties.

In response to this meeting Minister Harris indicated that he understood, and accepted, the anomaly that now existed.  He confirmed the Department of Health had already reengaged, with the Department of Public Expenditure and Reform, with a view to having this matter progressed.  He expected that this process would be continued, in the coming days, recognising the urgency of the situation.

In reply, on behalf of the unions, I indicated that we would expect a response, within seven days, and, if the matter was not addressed, then further steps, in the campaign of protest, would be rolled out before the budget in two weeks time.

May I close this Newsflash by giving a special thank you to the 400 graduates who attended today’s protest.  They all demonstrated, in such a visible form, that this matter has to be addressed and that further action will be taken, if necessary, to secure equity and justice.

Thank you for your attention to this note.